Nadiad is one of the blessed place, where Gandhiji rested in the alms-house of Nadiad. This destination is also famous for many religious spots like the temples, lakes and parks as well. Nadiad is also popular due to having a first Hindu Temple called as 'Malhar Rao Gayakwad', also known as the 'Narayan Dev', is established at the city center.

Tourists can also do shopping at giant Shopping Complexes, as well as watch movies in the multiplex. Apart from these, people can participate in DJ's which are held in some locations. There are even yoga centers and sports club located in Nadiad city; also, one can visit the town hall in Nadiad, as well as make a tour to the Jambughoda Wildlife Sanctuary that is just 131 Kms from Nadiad.

Below are the list of temples and churches located in Nadiad-

The Church called the Methodist Church is said to be 110 years old Methodist Church and opens its arms for people of all caste and religion. This church started to renovate between the years 2009 -2010. However, the renovation has been done without disturbing the structure, and it remains the same to its earlier state. 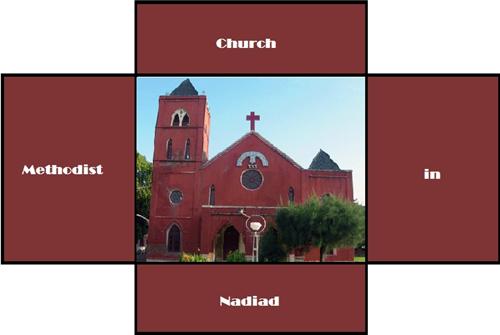 The walls have been made strong with concrete, polished and painted as well; while, the podium has been given the new effect. Also, the roof was completely replaced, and also floors are given a great look with modern tiles. Rather than in earlier ages, Methodist Church at present is very worth to visit.

The temple known as ‘Shri Mai Mokshdham’ is found to be the main temple of ‘Shri Mai’ and is thus famous as ‘Shri Mai Mandir’. It is around 135 feet or 41 meters of height, and tourists are allowed to take darshan of varied kinds of 51 idols and there are around 108 spire pots. The textual matter of ‘Shri Chandipath’ is a type of text, that is charted or pictured over the marble, and has been established and wrapped upon the inner walls of the temple.

There is also a ‘Maha Shree Yantra’, made out of the gold and silver. This Maha Yantra is around 1.2 meters tall, and weighs for about 275 Kgs. The glory of the Maha Shree Yantra has been increasing day by day, and Patotsav has been celebrated every year on the 'Asho Purnima'.

This temple called 'Sri Raxeshwar Mahadev Mandir' is a 700 old temple devoted to Lord Shiva, and is worshiped till today by a living saint. This temple is established in a large premise with spacious parking and better amenities such as ‘drinking water’ as well as the resting (a Verandah). Also, the temple is decorated with the pictures of various Hindu deities and saints like the 'Laxmandas ji Maharaj' and 'Narandas ji Maharaj'.

Tourists can visit the 'Bhojanshala' that belongs to temple, where food is provided; but, wasting of food is not allowed here, and this temple is established in the main market area of the Nadiad city. 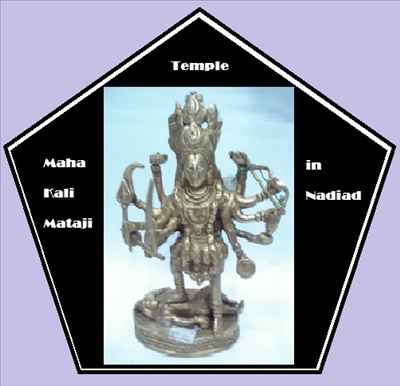 There is also a temple of Mahakali Mataji Mandir which is 255 years old, that lies at the entrance of the city, and was constructed by the 'Bhao Saheb Desai family'.

Other Mandirs in Nadiad

Shri Mota Narayandev Mandir, Shiv Temple, and the Bhairav Mandir are additional historic Hindu Temples located in Nadiad. Even there is a catholic church and PIJ Hanuman Mandi as well as the Shani Dev Mandir located in the same town.

There are many Lakes in Nadiad such as the Pilvai Lake, Kheta Lake, Malav Lake and some other lakes. Below are the list of lakes in Nadiad-

Pilvai Lake is one of the beautiful spot, where you can find amazing Brickworks (patla bricks) over the Pilvai Lake bank. You can make out it as bricks only through watching the bricks standing near to it. If you watch these brickwork from far distance, you feel as though these are stones, you cannot recognize. The steps of the lake seems to be 12 inches long. While, the length of every brick is about 13 inches in height and width is 8 inches. Whereas, at the end of the step, one can find the square bricks used for the end step, and the stonework is about 500 years old.

Kheta Lake is another wonderful lake, that was constructed by the Kheta Patel at Samvat during the year 1526. Wherein, the Kheta Patel decided to leave Singlav and settle in Nadiad during the year 1516. When he was about to perform 'Gruhashanti' (rituals made to purify the house before stepping in to that house), a male and female sparrow burnt themselves in the fire while doing Gruhshanti. After that incident, the descendants of Kheta Patel stopped doing 'Gruhshanti'.

Malav talav is located in south western side of Ahmedabad city. Initially, it was a natural lake. But AUDA constructed the lake and made a walkway surrounding to it; and also designed a garden on one side of a lake. There is a temple of Goddess Amba near the lake; while, the waste and water of the temple is discharged into the lake; wherein, some portion of the lake become dry during the summer season.

Other Lakes in Nadiad

There are also some other lakes such as the Ser Lake, Ratan Lake, Nana Kanneth Smashan Lake, Muleshvar Lake, and Undeval Lake, which are present in Nadiad.

There are certain parks like the Aksar Park, Jalaram Park, and others which welcome tourists towards Nadiad.